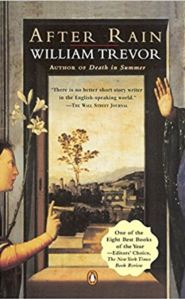 Have you ever fallen in love with a short story? I have. “I Stand Here Ironing” by Tillie Olsen, “A&P” by John Updike, “The Dead” by James Joyce, “A Temporary Matter” by Jhumpa Lahiri, and “The Short Happy Life of Francis Macomber” by Ernest Hemingway are just a few I love. “After Rain” is another. It’s a real charmer.

“After Rain” is the title story of a William Trevor short story collection. In the story, Trevor returns to one of his on-going themes, the exploration of a woman’s inner life, her alienation from her environment, her loneliness, and her dignity in the face of that loneliness.

If ever there was a woman in purgatory, it is Harriet. Harriet, a thirty-year-old English woman, had plans. For vacation, she was going to an island spa with her lover. Until he dumped her.

Pensione Cesarina is the consolation prize she gives herself. She chose the Italian hotel because her parents vacationed there when she was a child. Not only is she faced with her own failures at love, her parents were failures as well, both having committed adultery, then divorced.

The story begins in the dining room of the hotel. From her table for one, she orders the same wine she’s ordered all the other nights of her stay. All she has done for the past eleven days is read and stroll through the town and visit the church, not as an act of faith but rather as something to do to pass the time.

Trevor gives us sentence upon sentence, detail upon detail, of the life of the room. He contrasts the four solitary diners with the gregariousness of the other parties, detailing each with their own individuality.

As Harriet sits and dines, moments with her former lover flood back into her thoughts, intensifying her loss. She questions why she made this return visit to the place her parents chose to bring her. She wonders not why her affair had to end, but why did it end before the holiday and not after. It seems like her life has been made up of endings. Unlike the beginnings of young love in the room. Two young Englishmen are hooking up with two Belgian girls. One a stylist, one studying the law.

One of the other solitaries, an older man, joins her at her table. This is the only time in the story when Harriet carries on a conversation. And it’s a conversation with someone she sees as an intruder. Instead of listening to his words, she finds herself daydreaming of what might have been if only her lover had not dumped her. After the older man leaves, she realizes that he was lonely just like her. It is becoming obvious that she is oblivious to her surroundings.

And to what should have been obvious to her. She was unable to see her parents’ divorce coming. She has been unable to see that she has fallen in with lovers who aren’t up to her desire for more in a relationship.

The next morning, a stroll through the town and a seat on a park bench and a rehashing of a conversation between herself and her former lover. She missed all the signs. She was convinced she was happy. Then she’s on for more of the town and then, to get out of the rain, a cappucino and the memories of her parents taking delight in this place.

In the center of the town is the Church of Santa Fabiola. Harriet wanders inside and sees a painting of the Annunciation. Then Trevor describes this painting that will change Harriet’s life in as much detail as any other single thing in the story.

The Annunciation in the church of Santa Fabiola is by an unknown artist, perhaps of the school of Filippo, no one is certain. The angel kneels, grey wings protruding, his lily hidden by a pillar. The floor is marble, white and green and ochre. The Virgin looks alarmed, right hand arresting her visitor’s advance. Beyond—background to the encounter—there are gracious arches, a balustrade and then the sky and hills. There is a soundlessness about the picture, the silence of a mystery: no words are spoken in this captured moment, what’s said between the two has been said already.

Harriet’s eye records the details: the green folds of the angel’s dress, the red beneath it, the mark in the sky that is a dove, the Virgin’s book, the stately pillars and the empty vase, the Virgin’s slipper, the bare feet of the angel. The distant landscape is soft, as if no heat has ever touched it. It isn’t alarm in the Virgin’s eyes, it’s wonderment. In another moment, there’ll be serenity.

When she leaves the church, Harriet notices a change in herself. The rain has cleared things out. The heat has been replaced by a coolness emanating on the road. A bird sings. It seems like the world around her has been invaded by softness.

She returns to the Pensione and walks in the garden. She struggles to make “a connection to that she knows is there.” Then it comes to her. “The Annunciations was painted after rain.” And so the story continues for a few pages more, revealing that change of hers to her. She has been given the grace to continue her life but not in the isolation and alienation she once felt. She is now connected to the world around her.

This is not the only story in the collection where the supernatural impacts the mortal. In “Lost Ground”, a Catholic saint appears to a Protestant teenager. As the stories reveal, sometimes the supernatural can bring grace, sometimes not. It all depends on our response.

2 thoughts on “A Moment of Grace”

This site uses Akismet to reduce spam. Learn how your comment data is processed.